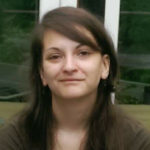 Hello! My name is Oana Goge and I am a game developer!
I love making (and playing!) all kinds of games. I first started programming over 14 years ago and I have been making games professionally for over 5 years.

Freelancing has been a great experience for me, it’s great to meet people with fun ideas and bring them to life. I am always up for brainstorming ideas, trying out new technologies and helping out however I can.

Game development has helped me develop a wide array of skills, not only related to programming (where I consider myself a generalist), but also in artwork and sound processing. While I am not a great artist, I know my way around Illustrator, Blender and Audacity, helping me make needed changes to existing assets and overall communicate better with peers in these related fields.

I’ve been learning English from cartoons ever since I was 1 year old, and have studied it from kindergarten to university. I consider it like a second native language.

Born and raised in Romania, feel free to switch to it if you prefer!

I have been living in Denmark for over 5 years, and I finished the level 5 course required for citizenship. While I still have much to learn to pass as a “native”, and I feel much more comfortable with English, I can read any kind of documentation you need me to.